Santa Eulàlia is Barcelona’s patron saint. On February the 12th celebrations, and a public holiday, are to be held in her honour (Santa Eulália was a 13-year-old martyr who was tortured on the orders of the emperor Diocletian, and she is often referred to as the children’s saint). Eulália lends her name to Barcelona’s impressive gothic Cathedral – Santa Eulália – though it is more commonly referred to as La Seu.

A day of street celebrations and parades is planned to mark the occasion. Festivities are to include the La processó de les Laies, a parade of giant statues begins in Plaça Sant Josep Oriol at 7pm, a correfoc (fire run) and musicians and dancers will provide entertainment throughout the Gothic quarter.

LlumBCN or the Festival of Lights is a festival that every year  transforms Poble Nou district into a stunning visual light show, lighting up many of the city’s most prominent buildings with colour, music and optical illusions.

When will the LlumBCN be held?

LlumBCN, Festival d’Arts Lumíniques, takes place on February 14th, 15th and 16th. Three days in which, when night falls, the light transforms the Poblenou district into a light show put on by artists from all over the world. In this 2020, the protagonists will be, in addition to light, movement, virtual reality and artificial intelligence, in an event that, without a doubt, is a challenge and a spectacle for the senses. 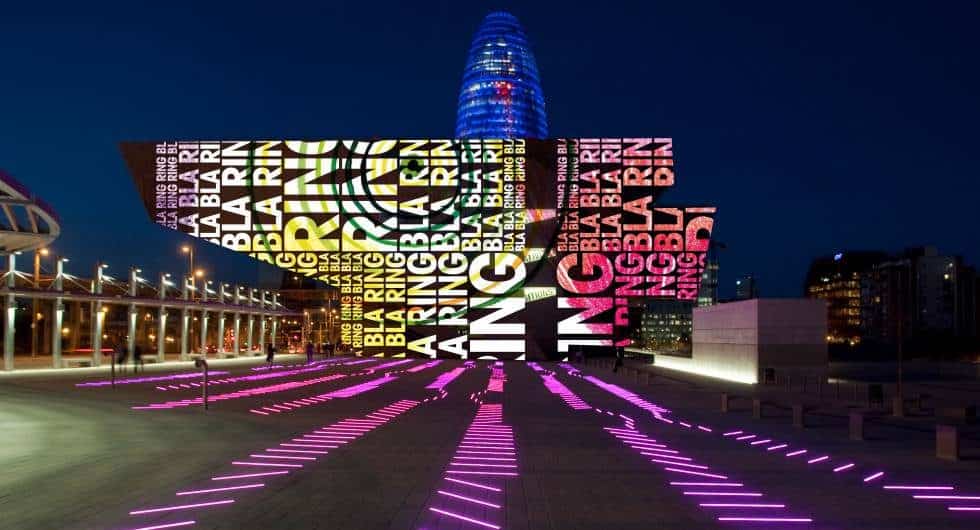 Who are the most outstanding artists of LlumBCN?

LlumBCN will feature numerous internationally renowned artists and creators in various disciplines such as lighting design and interactive environments, architecture and the live arts.

These artists base their work on the observation and recreation of the principles of science, nature and the universe, such as Luke Jerram’s Moon Museum: a large floating moon in high definition. United Visual Artists, one of the most important names in art and technology, will present their Musica Universalis, a stunning choreography of movement, light and sound inspired by the mechanics of celestial objects.

The labyrinthine FIAT LUX, by the designer Antoni Arola (DHUB Barcelona) or The day we left field, by Tundra (also at DHUB Barcelona), which immerses us in a discharge of high-impact stimuli inside the nervous system, are just some of the mandatory stops in this LlumBCN 2020 where the most extreme and visceral experience is provided by the artist Kurt Hentschläger with his show SOL.

In addition to these and other prestigious artists, LlumBCN also gives prominence to students from the schools of art, design, lighting and architecture in Barcelona.

What are the LlumBCN “stops”?

The Barcelona City Council website has a complete map where we can find all the facilities and routes of LlumBCN 2020.

If you are looking for accommodation in Barcelona for LlumBCN 2020, Feelathome offers you our FeealtHome Poblenou Beach Apartments Barcelona. Poblenou past and present