Gaudi’s Sagrada Familia is Spain’s most visited monument. Not only is this towering modernist masterpiece famed for its breathtaking eccentricity, it is also famed for still not being finished after nearly 150 years of construction!

Well there is a popular local saying that goes “a poc a poc”, it means “little by little” and it seems very appropriate here. Gaudi famously quipped “my client (i.e. God) is in no hurry”!

Good things come to those who wait, but meanwhile, a significant piece of the puzzle that is Gaudi’s design is about to fall into place.

The monumental 20-meter project, which includes a statue of the Catalan bishop, and close friend of Gaudi, Josep Torras i Bages, is supported by three legs corresponding to the theological virtues of faith, hope and charity, and is based on close study of a copy of Gaudi’s original drawings conducted by Bonet. Sadly the original drawings were lost when Gaudi’s study was set fire to during the Spanish civil war in 1936. However thanks to the copies made of certain drawings, in recent months Bonet has been able to study the proportions of Gaudi’s design, and has found that it follows typical Gaudí geometrical proportions, with ratios of 7.5 meters, 7.5 meters and 3.75 meters, or five times 3.75.”

Visitors to the Sagrada Familia can access the Nave, Crypt, Museum, Shop, and the Passion and Nativity towers. The entrance fee funds the continuing construction work. 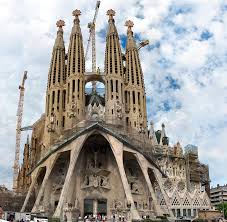