The CaixaForum art gallery in Barcelona opened in 2002 in a former factory at the foot of Montjuic near to Plaça Espanya, The gallery is sponsored by the Catalan bank “la Caixa”.

From October the 16th 2013 to January the 26th 2014 to La Caixa presents a retrospective of the post-impressionist painter Camille Pissarro (1830-1903). The exhibition includes 60 oil paintings from museums and private collections around the world. 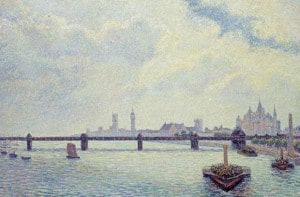 Due to his interest in painting light conditions, Pissarro often draws comparisons with Monet and he is closely associated with both Impressionism and Post-Impressionism. He studied with Gustave Courbet and Jean-Baptiste-Camille Corot. Pissarro was the only artist to show his work at all eight Paris Impressionist exhibitions.

In 1873 Pissarro helped establish a collective of young artists, and became the figure that held the group together. He was also a mentor and father figure to the major Post-Impressionists Georges Seurat, Paul Cézanne, Vincent Van Gogh and Paul Gauguin.

Pissarro at the CaixaForum is an excellent chance to see Pissarro’s work first hand for free – a great day out in Barcelona!