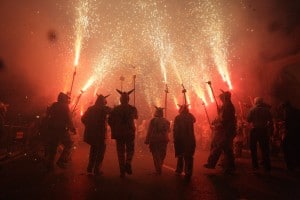 Often the highlight of Catalan (and Balearic) festivals, the ‘correfoc’ harks back to medieval times. Correfoc literally means ‘fire run’ – it is basically a firework display in which fireworks explode at street level, instead of being fired into the air. It is not for the faint hearted.

Symbolically the correfoc represents the battle between good and evil. ‘Colles de diablos’, or groups of devils, dance to drums, push giant model beasts through the streets, and light fireworks on pitchforks. The devil dancers then weave through the crowd spewing a shower of sparks everywhere.

Banned for over 30 years under Franco, the correfoc tradition was reborn in 1979 and is now attended by thousands each year during Barcelona’s Mercè festival, as well as many other festivals throughout Catalunya. 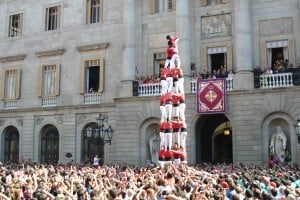 First performed in 1712, the tradition has become a staple of Catalan identity, and a feature of Catalan festivals. Today, any town, or district within Barcelona, boasts its own Castellers team.

These teams that compete to see who can highest and best formed best human tower are called ‘colles castellers’.

For a tower of any formation to be considered completed, a small child must climb to the top, raise one arm and hold up four fingers (to represent the four stripes of the Catalan flag).

This impressive act of teamwork extends right down to the ‘pinya’ – the crowd of people below acting as a base, who also act as a safety net in case the tower collapses. 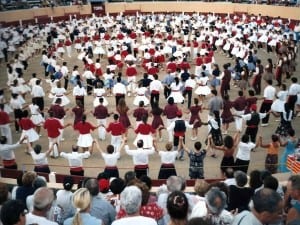 Originally from the north of Catalunya, the sardana dance is an important symbol of Catalonia’s traditions, unity and pride.

Dancers join hands in a circle and with their arms raised as they make precise steps to the music. As the small brass band plays, the circle becomes larger and larger. Movements are very controlled and dancers wear expressions of extreme concentration on their face, it is thus possibly one of the most cerebral dances ever conceived.

The Sardana is yet another tradition that was banned under Franco’s regime, and while the Sardana lacks some of the flair of some famous Spanish dances, such as Flamenco, it is not without its charm, and most importantly, the dance emphasises Catalan tradition and culture. Like the Castell, it emphasises values of community and co-operation. 10 Catalan dishes to try in Barcelona Our top 5 tapas bars in Barcelona