A guide to Sarrià-Sant Gervasi

Here we are going to take a look at one of Barcelona’s less known districts, Sarrià-Sant Gervasi. Most visitors to Barcelona visit the Gothic Old Town with Las Ramblas and the old port, or the Eixample and Gaudi’s famous modernista architecture. The first written document found about Sarrià dates from the year 987, and the origins of the village are a Roman colony. The old Monestir de Pedralbes belonged to the village of Sarrià and is now home to the Museo Thyssen-Bornemisza.

Sarrià-Sant Gervasi is one of the biggest districts of Barcelona and situated on the north-west of the city, and surrounded by the city districts of Les Corts, Gràcia, Eixample i Horta-Guinardo, and by the villages of Sant Just, Sant Feliu, Molins de Rei and Sant Cugat. As you fly over Barcelona on your approach to the city (usually over the coast) you will notice Sarrià-Sant Gervasi perched on the edge of the mountains at the back of the city. 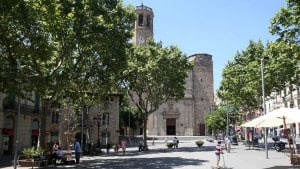 Due to its location at the back of the city on the higher ground, many people tend to pass by Sarrià-Sant Gervasi. However this is an interesting district with much to see, offering fantastic views over Barcelona. This is a very laid back part of town. Its character is primarily residential and very wealthy. The air here is much cleaner as it is higher up and above the pollution which clogs much of Barcelona.

The village of Sarrià was added to Barcelona in 1927 as the city expanded due to the industrial revolution, and luckily Sarrià still keeps its a village atmosphere, and its traditional narrow streets and small houses are perfectly preserved. The main street of Sarrià is Major de Sarrià and on Passeig Reina Elisenda is the Mercat de Sarrià, the market being the heart of any Barcelona neighbourhood.

Sarrià also borders on the stunning Collserola national park, the lungs of the city. This extends from Collserola Mountain at the back of Barcelona all the way to Sant Cugat. It is a wonderful place to explore on foot or on mountain bike and you would never know Barcelona city centre was only 20 minutes away.

Close by also is Tibidabo. The spires of the Temple de Sagrat Cor church on Tibidabo can seen from any point of the city. Right next to the church is an amusement park, the oldest in Barcelona and some of the original rides date to the turn of the 20th century. Part of the Woody Allen film, Vicky Cristina Barcelona, was filmed here.